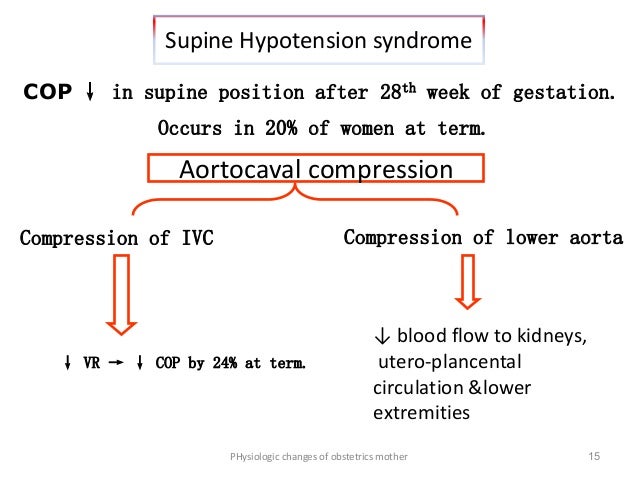 Critchley; Haemodynamic effects from aortocaval compression at different angles of lateral tilt in non-labouring term pregnant womenBJA: Aortocaval compression ACC can result in haemodynamic disturbances and uteroplacental hypoperfusion in parturients. Its detection is difficult because in most patients, sympathetic compensation results in no signs or symptoms. However, profound hypotension may develop after sympathectomy during regional anaesthesia. In this prospective observational study, we aimed to detect ACC by analysing haemodynamic changes in term parturients who were positioned sequentially at different angles of lateral tilt.

Cardiac output COstroke volume, and systemic vascular resistance were derived using suprasternal Doppler. Non-invasive arterial pressure AP measured in the upper and lower limbs was analysed to detect aortic compression. Only one patient in the supine position had aortic compression with the systolic AP in the upper limb 25 mm Hg higher than the lower limb. Among term parturients placed supine, none showed a decrease in systolic arterial pressure AP or symptoms of ACC.

Compression of the IVC impedes venous syndro,e which decreases cardiac output COand compression of the aorta may reduce uteroplacental perfusion which may result in fetal acidosis. This can be achieved by tilting the operating table, although the effectiveness of this manoeuvre is unclear and the optimal degree dyndrome tilt is unknown. Previously, ACC was demonstrated in parturients undergoing Caesarean section using radiological angiographic studies.

Since a direct effect of IVC compression is a decrease in CO, 10 we hypothesized that syndrone measurements of CO at different degrees of operating table tilt would enable us to identify the presence of IVC compression. The objective of this study was to measure and analyse changes in CO and other haemodynamic parameters aortocval indicators of the presence of ACC when term parturients are positioned with different degrees of lateral tilt. The study was conducted over a month period from June until February ASA physical status I—II non-labouring term parturients presenting for commpression Caesarean section were screened at the antenatal ward and recruited after anaesthetic evaluation the day before surgery.

Patients with cardiovascular or cerebrovascular disease, pre-existing or pregnancy-induced hypertension, preeclampsia, or known fetal abnormality were excluded. Premedication of famotidine 20 mg orally was given the night before and on the morning of surgery. The study was performed in a fully equipped room located in the labour ward before surgery.

syndorme A 16 G cannula was inserted into a forearm vein under local anaesthesia. A midwife was present throughout the study to monitor fetal well-being and an obstetrician was available immediately for consultation or emergency intervention.

For the purpose of detecting aortic compression, a second NIAP cuff was placed on the patient’s left calf for measuring the lower limb AP. This method measures beat-to-beat flow velocity across the aortic valve using continuous-wave Doppler ultrasound. With a validated internal algorithm, the aortic cross-sectional area is estimated based on patients’ height, weight, and gender and haemodynamic aoortocaval including CO and SV are calculated.

All measurements were performed by a single experienced investigator S. Repeated haemodynamic measurements compressiob made with patients positioned on the operating table with four levels of left lateral tilt sequentially applied: An engineering spirit level specially modified for this study was used to ensure accurate application of each level of tilt. A second modified engineering compresssion level was placed across the anterior superior iliac spines to confirm that each patient was lying level on the operating table.

This sequence was structured to generate the same proportion of patients, positioned according to a random order at each tilted position.

The sequence was stored in opaque envelopes which would be shuffled and drawn for each patient just before the commencement of the syndromr. Patients were maintained in each tilted position for at least 5 min for the stabilization of haemodynamic parameters before formal haemodynamic measurements were made. The measurements, including brachial AP, lower limb AP, and HR, were automatically measured and data were recorded using a computer program designed by our department.

At the end of the study, patients were transferred to the operating theatre for elective Caesarean section under standard anaesthetic management. Based on a pilot study of 30 term parturients in whom the mean sd of CO was 5. Statistical comparisons were performed using Student’s t -test or one-way repeated-measures analysis of variance with post hoc pairwise comparisons using the Bonferroni test. Results are presented as mean and sd or median and range where appropriate. Data were summarized and analysed by a non-clinical investigator who was blinded to the sequence order of the tilt positions.

A total of patients gave consent to participate in the study. Of these, data from 13 patients were excluded because of technical equipment malfunction or measurement artifacts. Two patients were withdrawn from the study after complaining of severe back discomfort from lying on the operating table, which was not associated with nausea, hypotension, or haemodynamic synddrome. The contingency plan was not implemented syndroje any patient as there were no episodes of hypotension or fetal HR abnormalities.

All patients were delivered by Caesarean section uneventfully. Data analysis was completed for patients.

CO and haemodynamic parameters for each lateral tilt. Values are mean sd. AP measurements for each lateral tilt. In these patients, the mean CO was Systolic AP was similar between different tilt positions. The SVR was smaller with greater degrees of tilt, which may indicate a decrease in sympathetic tone, when the CO is increased. In general, changes in AP measured in the lower limb mirrored those measured in the upper limb.

Among all the tilt positions, the HR was highest in the supine position. In this study, we demonstrated that significant differences in CO and SVR occurred when non-labouring parturients were positioned at different angles of tilt on the operating table.

Despite the presence of ACC causing a decrease in CO and pulse pressure, all parturients remained asymptomatic and there were no associated changes in the systolic AP or HR. Previously, Bamber and Dresner 5 measured CO changes secondary to ACC using transthoracic electrical bioimpedance and concluded that a table tilt of up to We have taken a different approach to analysing the data in our study compared with other studies.

In previous studies, changes in CO for all patients, which consisted of data from patients with mild and severe as well as patients with no ACC were considered together. Our finding suggests that the degree of ACC varies among individuals which probably reflect a dependence on multiple factors. Clinically, it may be useful to identify parturients who are prone to greater degrees of ACC as these patients might have more pronounced haemodynamic disturbances from sympathetic block during spinal anaesthesia. 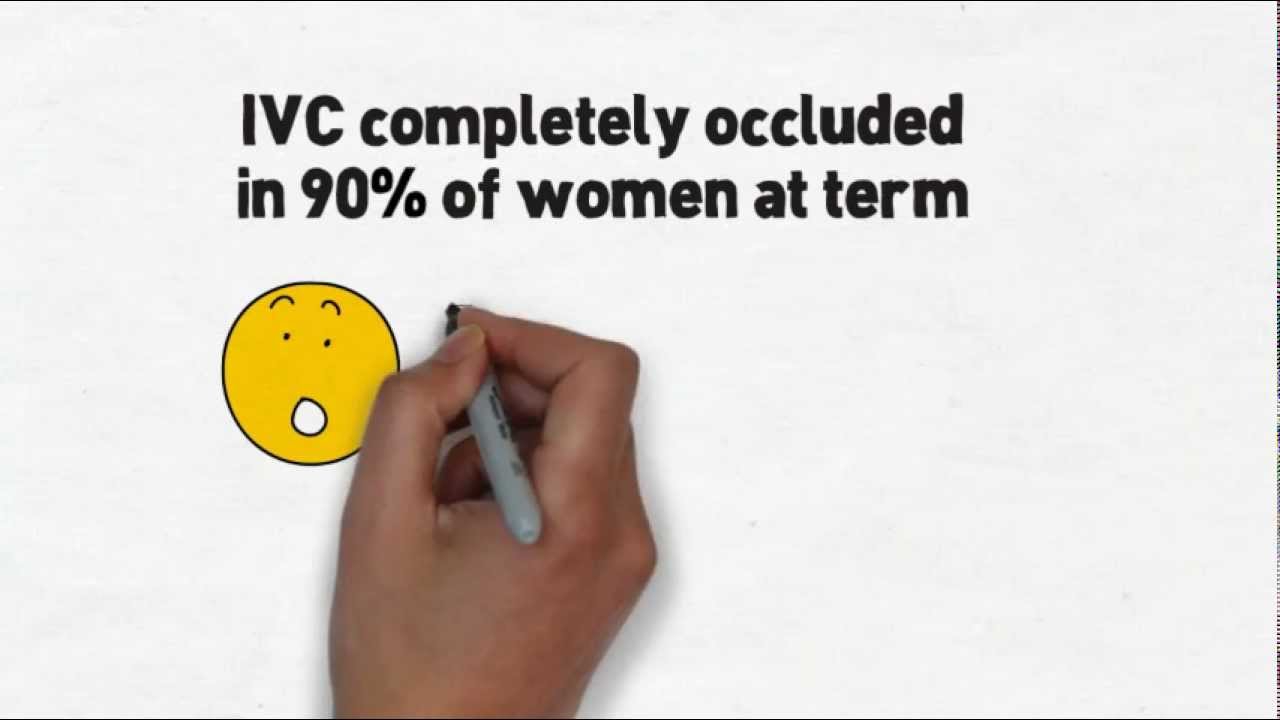 Although patients with severe IVC compression were expected to have a reduced CO, it is likely that they were able to maintain a normal CO to meet the metabolic demands as a result of compensatory venoconstriction in the lower limbs. This compensatory mechanism increases venous pressure, which pushes blood at a greater rate through the collateral circulations such as the paraspinal veins and azygous veins to facilitate venous return to the heart.

Further research would be of interest to confirm this. Furthermore, the differing degrees of IVC compression as suggested by our findings may partially explain the varying haemodynamic response to spinal anaesthesia and response to treatment of hypotension that is observed both clinically and in research studies. Our finding that AP measurement is insensitive for detecting ACC mirrors previously reported findings.

We found small changes in pulse pressure that correlated with changes in CO which probably reflects changes sydnrome SV when IVC compression was relieved by tilting. However, the change in pulse pressure was small and measuring this change is probably impractical for use clinically to detect ACC. Because of its simplicity, NIAP is commonly relied on in clinical practice for monitoring the cardiovascular system.

Previously, Ellington and colleagues 18 reported that only patients with symptomatic ACC who complained of dizziness when lying supine developed hypotension. No significant changes in AP were detected when asymptomatic patients were placed supine or in different tilted positions, even though ACC was probably present in some of these patients.

Imaging techniques have also been used to show the aogtocaval of Cmopression. Early studies utilized angiography 89 and IVC pressure measurements 31920 to demonstrate occlusion of the aorta and IVC.

With advances in imaging modalities, non-invasive techniques such as magnetic resonance imaging have sndrome used to demonstrate complete IVC compression with engorgement of the epidural venous plexus in near-term parturients lying in the supine position. 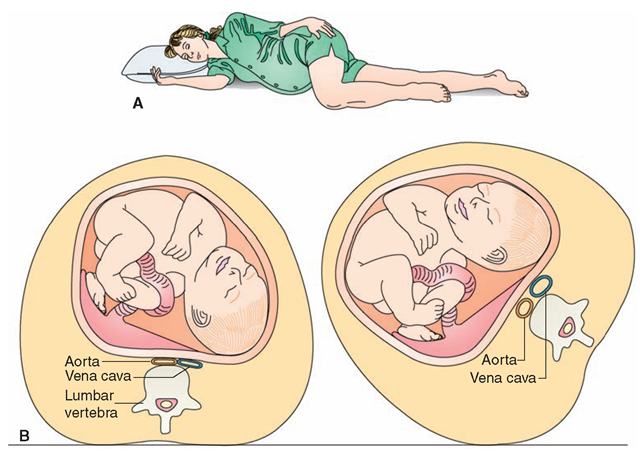 It is important to point out that the CO measured in the supine position for this group of patients was within the normal range; however, when they were tilted, IVC compression is relieved resulting in an increase in venous return and hence CO. This finding suggests that simply measuring the CO in one position will not detect the presence of IVC compression. This simple bedside method for detecting ACC allows the determination of an optimal table tilt for positioning term parturient during surgery.

Oxford University Press is a department of the University of Oxford. It furthers the University’s objective of excellence in research, scholarship, and education by publishing worldwide. Sign In or Create an Account. British Journal of Anaesthesia All Journals search input. Close mobile search navigation Article navigation. Haemodynamic effects from aortocaval compression at different angles of lateral tilt in non-labouring term pregnant women S.

Cardiac index in term pregnant women in the sitting, lateral, and supine positions: